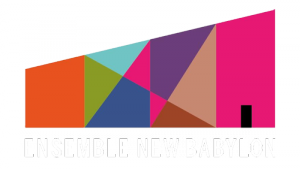 Ensemble New Babylon’s debut concert was in November 2012 under the patronage of the mayor of Bremen. Their aim was to reintroduce contemporary music to the cultural life of Bremen. Since its foundation, the ensemble has performed over 80 world premieres. An integral part of the ensemble’s concept is dealing with specific themes performed in unusual venues. As a result the ensemble has received numerous awards from the “Deutscher Musikrat” (German Music Council):

– in 2013 for the ensemble’s collaboration with the funk group Watson’s Mother, which included a performance at the Breminale Music Festival
– in 2016 for the 48-hour non-stop spectacle “The show must go on” at the Theater Bremen. This show was conceived to reflect current means of self-representation such as Facebook, WhatsApp and blogs.
– in 2017 for the collaboration with TanzKollektivBremen (the Bremen Dance Collective) where they performed the musical dance piece “ResonanzKörper” (“Resonance Body”) at TANZ Bremen (International festival for contemporary dance).

The ensemble has so far produced two CD recordings: “9”, recorded in 2015 on the STARFISH MUSIC label with pieces by 9 Bremen composers, and a portrait CD of the Spanish composer Benet Casablanca (2017), recorded on the NAXOS label.

Since its founding in 2012, New Babylon works on two basic fundamentals: firstly, the performance of contemporary music, tackling varied and challenging concepts and secondly, encouraging through the power of music, tolerance of the unknown/the foreign including the cultural, peaceful exchange of all nations, which the international ensemble has made its identifying feature from the very beginning. There were concert programs and tours focusing on Greece (2014), Poland (2015), Israel (2016), Argentina/Chile (2017), Iceland (2018), South Korea (2019) and Spain/Portugal (2022).

New Babylon has performed at the following festivals and concert series:

This website uses cookies to improve your experience while you navigate through the website. Out of these cookies, the cookies that are categorized as necessary are stored on your browser as they are essential for the working of basic functionalities of the website. We also use third-party cookies that help us analyze and understand how you use this website. These cookies will be stored in your browser only with your consent. You also have the option to opt-out of these cookies. But opting out of some of these cookies may have an effect on your browsing experience.
Necessary Always Enabled
Necessary cookies are absolutely essential for the website to function properly. This category only includes cookies that ensures basic functionalities and security features of the website. These cookies do not store any personal information.
Non-necessary
Any cookies that may not be particularly necessary for the website to function and is used specifically to collect user personal data via analytics, ads, other embedded contents are termed as non-necessary cookies. It is mandatory to procure user consent prior to running these cookies on your website.
SAVE & ACCEPT